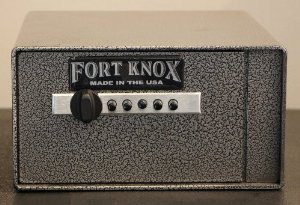 Now, I want to be really clear about Gun Safe…I think a good full-size gun safe is an important but having an easily accessible gun safe for your pistol is critical.

But, what we’re talking about here is your primary personal defense handgun that you carry with you on a daily basis.

“How do I store my gun at home securely using a Gun Safe?”

How do I secure that?

Well, there are a couple of things that I want to stress to you.

First of all, this is not something that you would put the gun in at home.

I’m going to recommend that you carry the gun on your person at home.

That way you have it for immediate access if something happens at the door or get surprised in the backyard, on your own property.

So this is not an excuse not to carry your gun.

The first style is a tumbler style combination lock.

Here is an example which I recommend if you go this route: GunVault NV300 NanoVault with Combination Lock (Chcek Prices Here).

And all you have to do is remember what you set your code at, really just straightforward just like a luggage or a small lock box.

The second style has a key with it.

I recommend, having had both of them, use the tumbler style.

The reason is once you secure your gun in here, you may be separated from that key, they maybe in your pants’ pockets, on the floor of your bedroom, maybe somewhere in your hotel room, you may have left it in the car.

You may have put it in a briefcase.

It could be in a number of places.

There’s no way that you can misplace this combination.

So simply put – all you do is you set your combination, factory default is usually 000.

Once you got this set, you simply open it up.

This will secure a relatively full-sized hand gun, most of your Glock, your 1911’s, all fit in here.

When I was traveling a lot, what I would do is put my gun and a couple of empty magazines, maybe a pocket knife, a cigar cutter or whatever I had that TSA really didn’t care for, and lock it up and put it inside my check bag, didn’t take up a lot of room and I could have my kit ready to go.

Oftentimes I’d put the gun in the holster in there as well so when I got to the airport, got my check bag,

I can load up and I was ready to go get my rental car.

This is the minimum level security.

Now, let me just talk about a couple of things I don’t like.

First let me talk about the little slot that you can put a cable through, loop the cable back around, has a little crimp on it.

This prevents it from just being simply grabbed.

It’s not going to be permanent.

It’s not going to prevent it from someone with tools but it will prevent a casual grab of the box.

The mechanism on the top, can be kind of moved around and it wears down as you access the box.

And this is just what you just got to expect that you’re going to have to be careful with.

There are better solutions out there but I like it just as a first line of defense and also for travel, it works really well.

And I would call this in a low threat environment and really it’s a tamper-resistant device that meets the requirements of storing the gun.

The second safe, is what I consider to be an electronic, biometric gun safe, meaning, I entered the combination with my fingers.

Some of them have fingerprint scanners that you can program for different things.

It also has a key override on it as well.

This safe in theory is really great because at night you can walk up and simply feel the buttons and this one I’ve set a really simple combination.

But if you don’t enter the code right, it’s going to start beeping.

If I need to access my gun in the middle of night because I think someone is in my home it’s going to be making a lot of beeping noise, this safe may not be the best choice.

And the reason I say this is it’s going to alert anyone who can hear in a silent house that I’m doing something, that I’m awake, that it’s going on.

When the safe opens, it kind of opens vigorously but not all the way.

And in this safe, you can have a little problem when you try to get a full-sized gun out of safe because you really can’t access the gun firmly and get the gun out.

The problem is with this safe, I don’t like because it makes a lot of noise.

It’s not particularly small, but yet I still can’t put my hand in and access a full-sized hand gun.

Enter too many times, this thing perpetually beeps until you pull the battery pack out of it.

I’m not a big fan of this safe.

I’m not a big fan of the biometric gun safes.

These things lock up and it could be difficult to get into.

The one I like that woks for me is made by Fort Knox, made in the USA, Fort Knox FTK-PN Personal Pistol Box Handgun Safe.

It has a combination lock that you push buttons on. But NO BEEPS.

You turn this latch, it’s on hydraulics.

It opens up for you.

What I like about this safe is I can literally put a full size weapon gun in and access it.

Couple of things I like about this safe from Fort Knox, first of all, I can just simply close this safe and if I don’t turn the tumblers, it’s still open even though it’s closed.

So, if I’m a situation where I don’t have small children or things like people that I don’t know come into the bedroom I simply turn this latch and now my gun is secure.

The other thing is this is significantly heavier than either one of these two.

So, in a safe, I don’t want the safe moving around as I try to access it.

All of these can be secured but this one I like because it has some significant weight to it.

The next thing is if I was going to attack a safe, most people will tell you that you’re going through the corners.

You put a pry bar in here.

You pry it down.

Rather than just going at it from, straight from the metal, you always go to the opening.

What I like about this safe is that we have overlapping corners.

We have overlapping corners on the inside.

So you can’t just get a crowbar in there and get leverage on it.

What you’re going to do is start bending the heavy outside metal.

The other thing that I like is it comes with two layers of foam in the safe.

With two layers of foam, I can set it up so that I can put any gun at the top of it or I could put a gun and a holster and extra magazine.

What I oftentimes do is take my daily carry rig which it will be a flashlight, it could be an extra magazine.

I can place all of them in there as well.

When I get ready to leave in the morning, all my gear is ready to go.

I think if you’re going to have a home safe, this is the one to invest in.

Let me just review for you real quick why I like this.

One, it gives me the option of closing it without locking it.

It gives me the second option of once I try to access the safe, I don’t have any noise going on.

It’s heavy but yet it’s hydraulically-assisted on the opening so I’m not going to fumble with it and I can access the gun with a full firing grip when I get into the safe.

This I think is the way to go if you can afford it.

This safe is around about $200 but it’s the only one you’ll ever have to buy.

It also makes a good alternative if you can’t afford a full upright safe.

This is a great alternative.

Even to store a couple of handguns in, one underneath the lower foam, put your daily carry gun here.

You can secure those.

Here are two other handgun safes I’m might purchase for another part of my home and business:

“How do I store my gun in my vehicle securely using Gun Safe?”

Here to review personal Gun Vaults or Gun Safe for your vehicle.

It’s a gun box put under your seat.

It doesn’t provide full gun safe security but if you need to stop at a parking lot, you can at least know that’s going to slow people down.

So this is the one that I’ve had for a few years.

This is called the GunVault NV300 NanoVault with Combination Lock by GunVault and it’s a real solid piece of material.

It got a little padding in it.

It holds a full size 1911 and the way it works – it’s obviously the most simple thing you can get too.

The way it works is you would take the cable and run it around the base of your seat bracket.

You could either leave it like that or you can wrap it around the lock catch and it provides a way for you to be able to pull the thing out from under the seat, put the gun in it, lock it and go on your way.

It takes about 10 seconds to do.

Right off the bat, it’s not quite as heavy which is a little strange.

So theoretically actually it will hold more at that point.

The locking mechanism is different so instead of being hinged, you actually slide it out.

t may. It will definitely hold a compact which is what my daily carry is.

The way this one works is you put the cable obviously around the seat the same way as the other one and put the end in and when you lock it, it latches onto the cable.

So now you cannot it slide out because the base of the cable is in the way.

So personally, that is kind of annoying to me.

I’ve got to pull the cable out and that’s attached to my car.

But now the cable is detached and I’ve got to go fishing for it.

This box is actually a little bit lighter.

I think the material is about the same but it doesn’t feel quite as solid as the other one.

So pretty much that’s all I can say about them.

They’re both about in the same price range.

I bought these both on Amazon and so I hope this has been helpful.

I know there’s not much to it but that’s pretty much it.

Here is other Car Gun Safe if you have the room I HIGHLY recommend the Gunvault SpeedVault SVB500 gun safe: