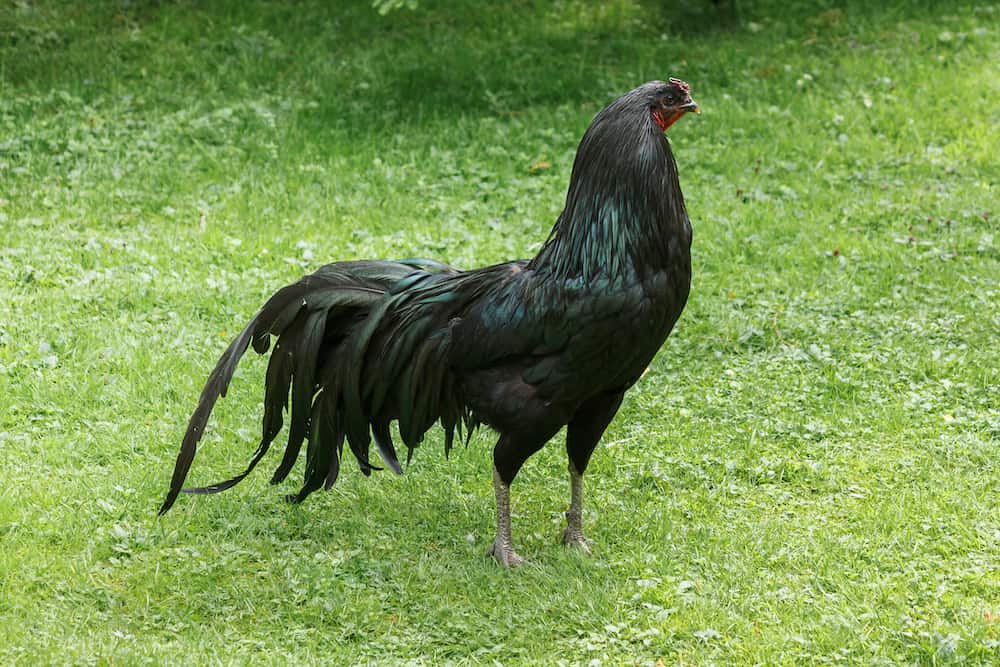 Whether you are thinking about raising chickens for eggs, for show, or adding to your brood, here’s what to know about the Sumatra chicken.

The Sumatra chicken is an ornamental breed. Many people raise them to show or to breed. While they lay eggs, that isn’t the main reason to keep Sumatra chickens.

In addition, homesteaders rarely raise them for meat as they have small carcasses.

It’s important to know, this breed does not like confinement. If you choose to raise them, they will do best in an open area where they can forage as they wish.

Because they aren’t as domesticated as other backyard chickens, oftentimes, people do not raise them with other breeds. They have wild tendencies but aren’t necessarily aggressive.

The Sumatra chicken isn’t particularly friendly so if you are looking for a chicken as more of a pet and for eggs, don’t choose this breed. There are chickens better-suited for this purpose.

Sumatra chickens have a personality more like a wild game bird than a chicken.

Yet, these chickens are stunning. The black Sumatra chickens break the look of a typical chicken. You will find both black Sumatra hens and black Sumatra roosters with iridescent tones along the feather’s ends.

Many people do not know about Sumatra chickens. This is because homesteaders don’t often choose them unless it’s to breed them or show them.

Here we explain the magnificent Sumatra chicken to see what they are like and what these birds can do.

Where Do They Come From?

Sumatra chickens were originally found on the isle of Sumatra. However, they can also be found in Java and Borneo. Many consider them to be jungle fowl.

They were not thought of as egg-producers, and the males were often used in cockfights. These fights brought money to the locals who put them on and were very popular at the time.

Although the temperaments of these chickens would seem to be good for fighting, they were not the top choice. They were often only used when other chickens were not available.

This was seen in the early days of cockfighting, so people began to breed them with others so the offspring would be better fighters.

These chickens were introduced to the U.S. in 1847. This was when people started breeding Sumatra chickens to increase the length of the tail feathers.

Their beautiful feathers remain one of the top things that people like about the breed and are a staple of their breed today.

They are black with a green iridescent shine on the feathers, that was not always the case.

When they were found in the wild, they could be seen with a few other colors on them, as well. Though the all-black was the most common color, the red-breasted chickens were seen often, too.

The black-colored chickens were the ones that were the most popular among people. However, they were not as long-feathered as one that you would see now.

This is because, in the wild, the feathers were not naturally that long. They were bred to be that way once they were brought to the U.S.

Once this type of breed was seen, people flocked to them because of the long tail and intense shine of the beetle-green and purple colors shining on the tail.

Now, the Sumatra chicken that you will see has the elongated tail feathers, purple features across the face, and the green and purple shimmering on the feathers.

They have a pea comb and red wattles. Their skin color is yellow. They have several spurs on each leg.

Although the bushy tails of these Sumatra hens and chickens make them look a bit larger than they are, they usually weight about 3.5 to four pounds.

With the average chicken weighing between five to 10 pounds each, this makes them one of the small to mid-range size breeds.

Some weigh eight to 10 pounds on average, but you will find others that are only one or two pounds. They are just below the mid-range of five pounds.

Still, with the tails being so long and decorative, Sumatra chickens look bigger than they are.

If another animal is attempting to attack it, it could scare it off by making its body look even larger.

This helps keep them protected and makes the wings and tail feathers more than just a pretty feature but also a useful one.

The males and females of chicken species can have a similar or differing temperament. This just depends on the breed.

The temperament of black Sumatra roosters is jumpy and a bit flighty. They tend to move in sharp, fast movements and shy away from being closer to others.

They are known to be pretty difficult to raise because of this type of temperament. Tips raising roosters

Black Sumatra roosters are also good at shooting off into the air, so they can escape from anything dangerous.

This makes them easy to lose but hard to catch, which is one reason why they are not often seen as a backyard breed.

Opposite from their female counterparts, the roosters tend not to be as broody. This is likely because the roosters do not have to do any of the egg-producing.

The female black Sumatra chickens were not typically used for fighting purposes like the roosters were. This is because they had a different job, which is laying eggs.

Like other female chickens, black Sumatra hens lay eggs but they are not big egg producers. They average 100 eggs per year. Their eggs are small.

Or, if you want to have more chickens for laying eggs in the future as your current hens age, you can have them fertilized by the roosters.

These hens lay eggs through the wintertime, which is not something that all chickens can do. This makes them great egg producers when you want to have a coop.

Still, because their temperament is somewhat similar to the males, they are a bit hard to handle.

Black Sumatra hens tend to be jumpy and extremely alert. This makes them overreact to small noises and causes them to jump into the air when they feel like they need to get away.

Nevertheless, if you can handle having them in your coop, then you could have fresh eggs all year round.

The hens have a tendency to brood. This brooding tends to make them isolate themselves more than usual and not be as compliant with commands.

Though this might seem like a personality trait, there is a real reason why this happens. The hens will isolate and keep to themselves when they are becoming mothers. Their hormones will let them know that something is changing and that they need to rest.

They will then sit and settle in so that she can hatch her eggs. Typically, a hen will allow the egg to incubate for up to 21 days.

She will ensure that the egg is kept at the perfect temperature and has the right amount of humidity, as well. After this period, she will hatch the eggs, and you will add more chickens to your coop.

The downside is the hens won’t produce additional eggs while they are brooding.

When it comes time for the Sumatra hens to form their eggs, they do come in more than a single color. They are also very small in size compared to the eggs of other chickens.

So, what color eggs do Sumatra chickens lay? They typically come in shades of white and off-white. They can also be found with light tinting of tans or browns.

This is a larger range of colors, so each egg that the hen’s lay can be quite different. Some might come out being a much brighter white, but others look almost completely brown.

This can make it difficult to tell which chicken laid the egg if you have a few different breeds. Therefore, it is best to keep their spaces separate so that you can tell them apart easily.

This breed of chickens does have wings and can fly like many other birds. The discovery happened when they found that these chickens were flying between Sumatra and Java.

This means, the Sumatra chicken doesn’t just have wings for show. They can fly, and they do so quite well.

As mentioned, because they can fly, it can be difficult to catch them when you are keeping them for egg production. With wings that work very well, they could decide to fly away.

As you would with raising any backyard chickens, you will want to enclose the run and any outdoor space completely. This is to protect them from predators.

However, with these chickens and roosters living well together, even having the males and females together will not cause any of them to fly the coop.

Why choose this breed?

Even with their broodiness and seasonality, which causes the males to only mate during certain seasons, they are great birds.

Known for their intense beauty and long feathery tails, they offer a fancier look compared to the typical brown chicken.

Many people choose the Sumatra chicken for showing. They are often popular with kids who raise them for FFA or 4-H.

Before choosing them for your backyard hobby farm or homestead, it’s important to know they aren’t as friendly as other breeds.

Sumatra Chicken: Is It Right for You?

With their flighty temperaments making them jumpy, Sumatra chickens are alert and shaky creatures.

If you have the means to keep them contained but with the ability to have them feel free to roam, then considering a Sumatra chicken could be a good addition.

Again, only get this chicken breed if you are willing to keep up with them and their flighty ways.

They are not usually used in coops for a reason, and with their tendency to be jumpy and fly away, this is a big consideration before deciding to keep them.

All in all, you have all the information you need to know about the black and beautiful chicken. With its fancy feathers and regal stance, the Sumatra chicken looks like few other birds.

This could be a great option for you to have, especially if you are considering ornamental fowl.

Just make sure that you give the females time to brood, help keep the peace between the other breeds, and you will have a peaceful and flourishing coop.

Remember, if you are looking for best egg-laying chickens, do not choose the Sumatra chicken. Another black chicken is Ayam Cemani.