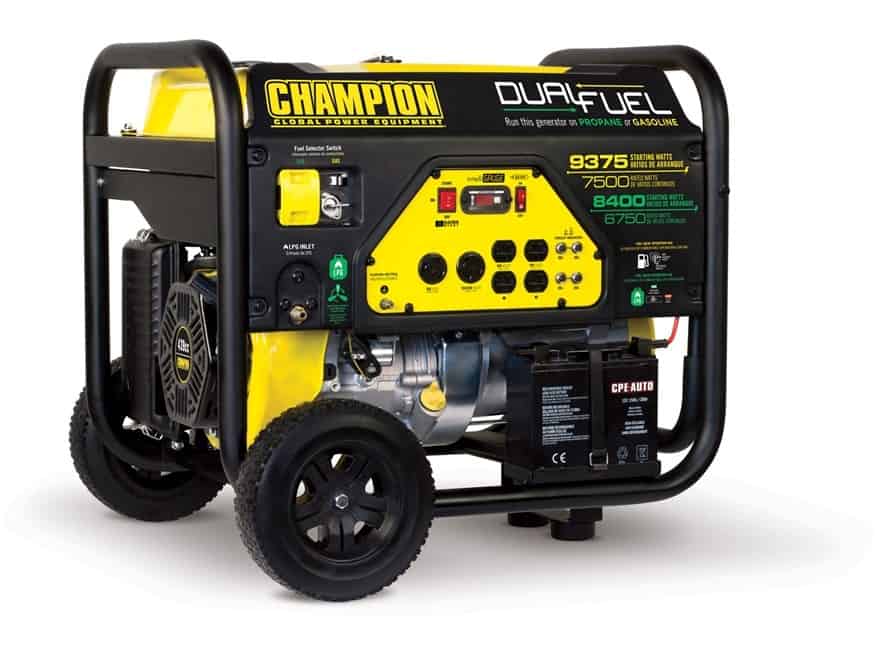 Any product that calls itself “champion” must be able to back this up, and the Champion Generator is one that does.

There are many reasons why these generators are a hit with homeowners, chief among them are its versatility, reliability and the fact that you can count on them for power backup, camping, at home or the outdoors.

Champion has always been known for their innovative approach and technologies, and nowhere is this more apparent than with their dual fuel generators like the 71532, 71531 and 71530.

Champion Generators were built so you can use either LPG or gas without any compromise when it comes to features or safety.

Champion Generator have a fuel selection switch that combines ease of use with safety.

The way these generators have been designed means you can use only one fuel type at a time, ensuring your safety and reducing the possibility of accidents or damage to the generator.

This feature does not affect the run time of the generators, as the factors that do are amount of load, elevation and temperature.

Generally speaking though, the gasoline run time for these models is 8 hours at 50% load with a full tank.

Note: when the term full tank is used there is actually ¼ space gap on the tank so fuel can expand.

The run time for LPG Champion Generators can vary depending on the dimensions of the cylinder.

In most cases only the 20 lb. cylinder will be used but 30 lb. and larger cylinders may be utilized.

Since the engines have been certified for particular emission standards, the engine and generator must not be modified because it might damage the generator.

Champion Generators also have many of the features found in their other products.

For instance, all of these models have a low fuel indicator that will automatically shut the engine off once the remaining fuel falls under a specific threshold.

If temperature is ideal, the standard 10W-30 automotive oil will do fine, but you should refer to the owner’s manual.

The Champion 2000 watt generators from Champion come with several features that other portable generators don’t have.

One of their more popular models is the Champion Power Equipment, which is equipped with an 80cc single cylinder 4-stroke OHV engine that generates up to 2000 watts.

Champion 2000 watt generators have a fuel tank with a capacity of one gallon, and with a 25% load will run for up to 9.5 hours which is very good for its class.

Similar to the other generators with the OHV engine, the Champion 2000 Generator has a low oil shutdown feature and once the critical low oil level is reached, will automatically shut down.

This generator also comes with genuine sine wave inverter technology, ensuring the safety of your electronic devices when used.

These generators also have an economy mode that will save fuel while ensuring there’s protection from overload.

Just like other generators from Champion, these have a pull recoil start USDA approved spark arrestor.

More than anything else these 2000 watt generators produce clean power without the noise that is present in other generators.

Aside from use at home, these can be used in cabins and RVs.

For many though, the main attraction of Champion 2000 watt generator is the Inverter Technology because it provides assurance for sensitive electronics.

The Champion Generator also has a variable speed engine that leads to greater noise reduction, fuel conservation and extends the life of the engine.

This means you can stack a couple of these 2000 watt generators and get a single, unified output in a single outlet.

Aside from being quiet, these generators are fuel efficient and even when set on economy mode, can power a TV, DVD player, and lights in a trailer.

Even in standard mode the Champion Generator doesn’t produce a lot of noise, and fuel consumption is half that of a typical 4000 watt generator.

There are several Champion Generator units from Champion in the 2000 to 2500 watt range and they have unique specs and features.

If you’re going to purchase one make sure that it matches your household requirements so you don’t end up with a generator that isn’t powerful enough to match it.

RPM: Automatic (based on load)

Several Champion LP Generators are available from Champion, and the watt portable generator is one of the best examples of power and portability.

Similar to the other generators above, the Champion LP Generator is designed for running a wide range of appliances and electronics.

When on full power, the Champion Generator can run security systems, a furnace fan, sump pump, refrigerator, a TV and lights simultaneously.

The Champion 9375 Generator isn’t just for emergency use during a power outage, as it’s also ideal for operating 4 to 5 power tools or an air compressor.

With its 439cc OHV engine, the generator can run for 9 hours at 50% load with tankful of gas.

For many people however the biggest attraction here will be its capacity.

In case there’s a storm and the power is cut, you can use this to power up a good sized household.

When at full power the 9375 can handle fans, a microwave, a central heating fan, lights, and a couple of refrigerators.

Another advantage of these generators is they start quickly and have the capacity to handle most loads.

Champion All Power Generators come in different styles and Champion’s home generators are designed for reliability and dependability.

In case there’s a power outage, the generator will kick in and provide power.

These generators also known for being quiet and while they supply power to your home, it’s not going to raise a ruckus and won’t distract you or the rest of the neighborhood.

Once the Champion All Power Generator is installed, you don’t have to make any modifications because whether power comes out during the middle of the day or night, the Champion will step in.

This is possible because the generator always keeps an eye on your home’s electrical supply so in the event of a power interruption, the unit will start automatically and supply the power.

Compared to other generators, Champion All Power Generator don’t need refueling as they are connected to your gas line.

In other words these generators are meant to be a full blown and permanent backup power source.

Once the generator has been set in place you don’t have to do anything else.

There are several Champion All Power Generator models available, with each having its own set of features.

While they have different specs, they do share similar characteristics and functions.

What you may not realize is that power outages don’t just result in loss of electricity but it also leads to hardware and appliance damage.

Prolonged power loss will also spoil food, and when combined with the damage that appliances sustain, can cause thousands of dollars.

With a generator this will cease to be a concern because as soon as the power goes off the Champion Generator will jump in.

And regardless which of these generators you choose, operation is quick and straightforward.

If you’re a first time buyer, all the Champion All Power Generators come with user guide so you’ll know how it’s done.

Another benefit that comes with these units is they are low maintenance, a problem that’s common with most other generators.

It’s also worth pointing out that these units are available in varying power, ranging from 2000 to 7500 watts.

Even if you need a lot of power you can depend on the generator to last.

As the information here shows, the Champion Generator has options for different people.

These products are also widely available online and other retailers so you can compare prices, shopping cost, and other options.

If this is your first time to buy, give yourself time to study the products so you get one with the best value for your money.

We suggest further research online, which offers a wide range of — nice to not have to transport this from a retailer yourself.