Hydroponic PVC – Do you want to grow your own plants but you don’t have enough space in the backyard? Do you live in a condo thus you don’t have any backyard to grow veggies?

Then you can build a hydroponic PVC system. It is a clever way of growing plants on a small area without exerting much effort.

It can hang on a wall or a fence, meaning you don’t need to have a garden to pursue your hobby.

Hydroponics actually goes along way back, as the ancient Egyptians and Aztecs were said to be familiar with the principles of growing plants in water enriched with nutrients.

There are lots of plants that you can grow in a hydroponic PVC system. These include onions, spinach, chives, zucchini, arugula, yellow squash, lettuce, basil, and cucumbers.

Other plants that you can nourish in a hydroponic PVC system are peppers, strawberries, chili, cherry tomatoes, parsley, and radishes. 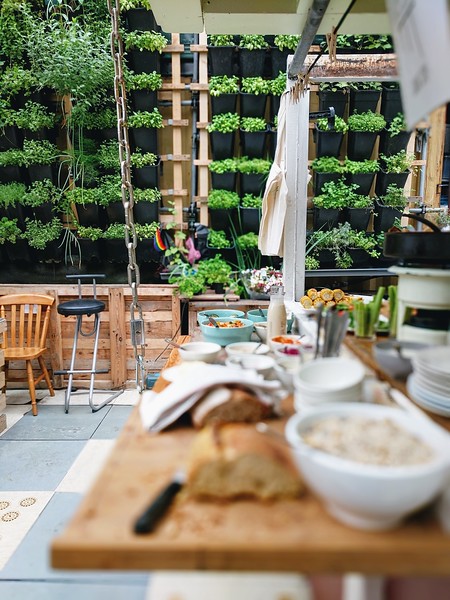 What are Hydroponic PVC Systems

While there are other materials that can be used for a hydroponic system such as metal or plastic, PVC has become very popular among home gardeners because of its inherent advantages.

Arguably the most glaring advantage offered by PVC is affordability. A hydroponics system based on metal or plastic can be very costly.

PVC, on the other hand, is very easy to put up because the low price of the material.

If you’re looking to create your own hydroponic system at home, you’ll be attracted to the low price of PVC that leaves you with enough space for error and tryouts.

Another advantage of PVC is its efficiency. PVC pipes are lighter than other hydroponic system materials like steel.

It is also not toxic and soluble.

It’s perhaps the quality that sets PVC apart from other materials, which can break down over time due to constant exposure to rain. PVC can withstand harsh elements, and won’t be a problem if taken indoors.

This is not to say that PVC doesn’t have its own share of disadvantages. There are some downsides to having a PVC hydroponic system.

One is the tendency to cause contamination. Plant roots can also get inside the PVC pipes.

However, these problems can be easily controlled.

For instance, the use of a water permeable fabric for coating the inside of the pipes can control the roots from getting inside the PVC pipes.

This should let water and nutrients to run through and stop the roots from getting to the inside of the pipes.

The other problem can be solved by thoroughly cleaning the pipe with a 1 percent sodium hypochlorite solution after a crop has been grown in it. This involves mixing one part of bleach with nine parts of water.

Should you decide to build a DIY hydroponic PVC garden, there are certain things that you will have to determine.

Do you want to build a horizontal garden on a table or floor, or mount a vertical one on a frame or wall?

The horizontal garden is slightly less difficult to put up because there’s no fear of the thing collapsing under the weight of the plants and water.

But if you have a limited space, the more viable option is the vertical garden.

In case you opt for a vertical design, you need to buy a large pump as it will have to work harder in pumping nutrient-filled water to the topmost part or layer of the garden.

You’ll also have to decide on the hydroponic method. There are two common choices here—ebb and flow and deep water culture.

Ebb and flow hydroponic systems allow water to flow through the pipes. There’s a pump that runs for 15 minutes an hour, flooding the pipes with water filled with nutrients.

Once the pump is turned off, the nutrient solution goes back into the reservoir. It simply duplicates the rain and drought cycle.

The other method, deep water culture, has the roots of the plants suspended directly in the nutrient solution. The PVC pipes are filled with the solution.

Meanwhile the pots with plants are placed in holes that are drilled on the upper part of the pipe.

Lastly you need to determine the growth medium. You can go for HydroClay pebbles that are very good in holding oxygen aside from providing excellent drainage.

You can also opt for Perlite and vermiculite which are ideal for roots needing more support. Rockwool cubes, meanwhile, are ideal for starting seeds in the hydroponic system.

The size of your hydroponic PVC garden will also be influenced by the number of plants you intend to grow. Generally speaking, you can allot six inches of PVC for every plant.

Building a hydroponic PVC system is a DIYer’s dream because of tools and materials needed are often found in the household, or can be bought at a nearby home improvement store.

Moreover, setting up is quite simple.

The process requires cutting and connecting the PVC pipes, cutting holes, cleaning the system and controlling the water level in the pipes.

We’ll show you how to build a DIY hydroponic PVC system that measures 3 ½ feet x 8 feet, and capable of holding up to 36 plants that are up to six inches tall.

It can also hold up to 15 gallons of water, with its nutrient reservoir holding almost the same amount. You’ll also need a hydroponic pump for this.

How to start DIY Hydroponics

Then cut two six-inch pieces which will be used for the u-turns for the PVC elbows.

Clean the burrs from the pieces using a PVC primer.

Hold the pieces together for a few seconds when gluing them to avoid the pieces from popping back out.

Make holes for the plants

Once the u-turn pieces are dry, the next step is making holes for the plants. Ideally, the system should be left to dry overnight before drilling holes.

This should make the process easier to accomplish, and ensure that the entire system won’t come apart while you drill the plant holes.

The plant holes should be at the top of the PVC pipe.

Measure 3 ½ inches from the elbow of the pipe, marking it with a dot.

Each long pipe which measures 7 feet six inches long should have nine dots, with a space of 10 inches in between.

After drilling the holes, clean the system again and flush it several times to ensure that it is safe from breaking.

Drill small holes on the sides and bottoms of the cups. Make the holes small enough that no one can see them. 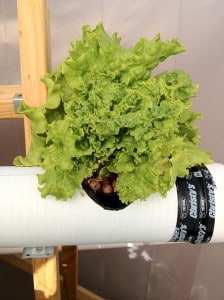 At the end of the system, install a dam hydroponic system to keep the water in the system as high as possible without causing any leakages.

The DIY dam can be a milk jug. For this dam to be operative, look for a piece of thin plastic and a 4 inch piece of scrap PVC.

Trace out a circle on the plastic using the scrap PVC then cut it out.

Cut a side of the circle for the height of the water level that you would like to be maintained inside the pipes.

Then cut two slits that would give a flap which can be bended down so that the level of water can be fine-tuned.

Set up the system by filling it with water, and the dam filled with 1/3 water.

Turn on the hydroponic pump.

The amount of water going back into the system should be the same as what is being pumped into it.

Put the disposable cups into each hole, adding clay pellets to each cup.

Half of the pellets should sink in the water.

To complete the system, install a 1000 watt light.

Of course, you can make your life easier by buying a hydroponic PVC kit. But there are certain things that you have to consider when buying one.

The kit should have all the necessary items like grow lights, nutrients, fan, grow medium, and instructional guide.

Odor control is equally important. Be sure to have a plan for odor control so your garden won’t be saturated in unpleasant scents.

Lastly, buy a kit with outstanding customer support so that you can have someone to turn to in case you find something wrong with the kit.