DIY Hydroponic Systems – By definition, hydroponics is a water culture method wherein the plant roots are totally immersed in a nutrient-rich and oxygenated solution instead of soil.

What’s even more encouraging for growers is that they can build DIY hydroponic systems which they can use to grow plants all year round.

There are six types of hydroponic systems.

We will explain each type and also discuss how you can combine different hydroponic systems, depending on your situation and needs.

As you learn about the best hydroponics equipment, you may decide to purchase a hydroponic kit or DIY hydroponic systems. They can be a very economical way to get started.

There are many reasons why hydroponics systems are becoming more popular among hardcore growers, garden enthusiasts, homemakers, and families who simply want to have more plants.

Perhaps the biggest advantage to hydroponics is that it can greatly increase plants’ growth and yield.

There is the potential for plants to mature up to 25 percent faster and produce 30 percent more than the same plants which are grown in soil. 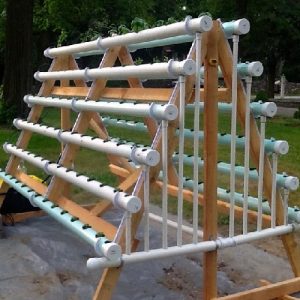 Why is this so? Plants have the potential to grow faster and bigger because they don’t need to work hard to get nutrients.

A hydroponics system provides the plants what it needs, so it can grow upstairs fast instead of expanding its root system downstairs.

A hydroponic system uses less water than soil based plants.

Thus it can be said that a hydroponics system is also environment-friendly because there is a reduction in waste and pollution from soil runoff.

Can build hydroponic system in a small area

Another reason why hydroponics is highly popular these days is because it works well for growers who don’t have a backyard to plant.

Hydroponics can save a lot of space unlike in traditional soil gardening. Typically, hydroponic systems are vertical, rather than horizontal. It’s considered a type of vertical farming and growing.

Home-based growers can pack their plants closer together. In fact it is not uncommon to see plants grown in hydroponic systems in apartments and condos.

If you aren’t the most experienced grower, you could end up ditching the system because of its intricacies.

Managing it is also time-consuming and challenging, as you need to closely watch and balance the pH and nutrient levels on a daily basis.

Perhaps the biggest risk you are taking just in case you try a hydroponic system is the potential to kill off your plants due to a pump failure.

Plants can die quickly in a water culture since the system can’t store water the way soil can.

A pump failure can cut off a fresh supply of water, and that would be enough to kill your plants and waste whatever progress you have made. 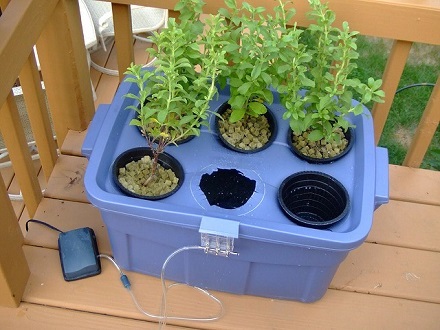 There are six types or methods of hydroponics systems.

Wick is the easiest and lowest costing hydroponic method. The idea is that a material like felt of wicking rope is surrounded by a growing medium such as perlite.

One end of the wick material is immersed in a nutrient-rich solution, which is then wicked to the roots of the plant.

Wick is best suited for growing small, non-fruiting plants such as herbs and lettuce. However, it won’t work for large plants that need more water.

Water culture in a hydroponic system

Water culture is perhaps the most popular among home growers. It is simple and inexpensive to build.

Also known as the reservoir method, this system has the roots of the plant suspended in a nutrient solution.

The latter is oxygenated by an aquarium air pump which prevents the roots of the plants from drowning.

Ebb and flow for a hydroponic system

The third type, ebb and flow hydroponic system, functions by flooding the growing area with a nutrient solution at certain intervals. The solution then slowly drains back into the reservoir.

To ensure that the process repeats itself at specific intervals, a pump is hooked to the timer. This allows the plants to get the right amount of nutrients at certain intervals.

This hydroponics system type is best suited for plants that are accustomed to dryness. 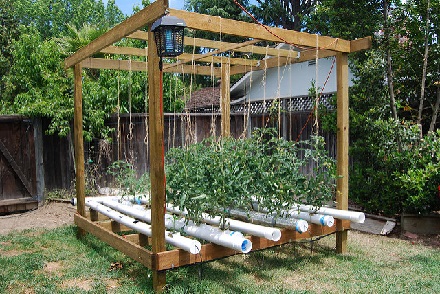 The fourth type, drip, is also quite simple. There’s a tank of water where vital nutrients are added, creating a nutrient reservoir.

The water is then released to the plants individually through a network of tubes. The problem with this system is that it is notorious for clogging due to the particles from nutrients.

In nutrient film technique or NFT, a continuous flow of nutrient solution runs over the roots. The solution is slightly tilted, so that nutrients will flow with the force of gravity.

It is preferred by most growers because the roots of the plant are able to take in more oxygen from the air.

It can also facilitate a fast growth rate because the plants are able to get more oxygen, while the tips of the roots get the nutrient from the solution.

The aeroponics system is the most technologically advanced among the six hydroponics systems. In fact scientists believe that this system will be the solution to man’s food shortage woes in the future.

In this system, the plants are suspended in the air and the roots hanging down below.

A tube pumps up the nutrient solution while another pump of higher pressure sprays the solution as a mist over the roots. Aeroponics vs Hydroponics

Building your own hydroponic system

When you do it yourself, you can choose from any of the six methods, or combine their principles in building your own hydroponic system.

One reason why DIY hydroponic systems are popular among do-it-yourselfers is that you don’t need to buy a lot of materials for this project.

In fact, you can have a DIY hydroponic system using recycled water bottles.

One note when choosing plastic water bottles is to watch out for the harder plastics. They are often number 7 plastics which you will want to avoid.

This is the plastic made from polycarbonate which is made from Bisphenol-A (also known as BPA) a hormone disruptor.

The best plastics for hydroponics are number 2 and number 5.

For this project, you will need a plastic water bottle of any size, a cutting tool like a knife or razor blade, a marker, and a drill or awl.

You will also need a wicking material like a cotton yarn, a hydroponic nutrient solution, perlite, and duct tape.

It must be long enough to reach the bottom of the bottle and with at least an inch or two remaining in the top. 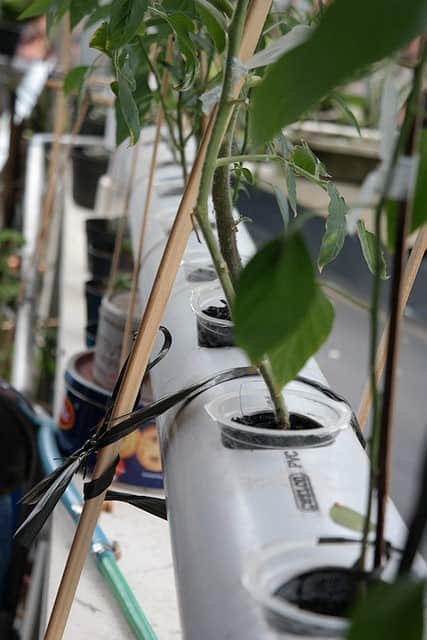 Add the seedling in your hydroponic system

Then put a small seedling in the perlite. The seedlings should get nutrients from the dampened perlite.

Once the nutrients have been absorbed, more nutrients will be drawn up from the wick.

There are also instructional manuals to guide you on how to set up the hydroponic system.

But you will still have to watch the systems closely unless you want your plants to die quickly.

While you obviously have to pay upfront for these hydroponic kits, it may well be worth the price if you want to make sure you get things right, and if you want to start right away.

Advantages of Hydroponic vs Soils

Save water in hydroponic system

One is that it can save water. Studies show that a hydroponic setup can save as much as 90 percent of water used in traditional soil gardening. Hydroponics vs Soil: Which Is Better

No weeds in a hydroponic system

Second, you don’t need to weed in hydroponics system. Because there is no soil, there won’t be weeds in a hydroponics set-up.

You can spare yourself of the exhaustion you will get from weeding. 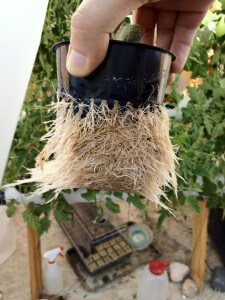 Plus, there are no pests and diseases to worry about. Taking away soil from the equation also gets rid of soil-borne diseases that plague traditional gardening.

Some plants grow very well in hydroponics. These include hydroponic lettuce and hydroponic tomatoes.

Finally, you can save a lot of time. You don’t have to water the plants, or weed like in a traditional garden.

Plus you don’t need to put pesticides and fertilizers. These tasks that you have to do in soil-based gardening aren’t needed in hydroponics systems.

The idea of growing plants in a soil-less environment may sound impossible for the uninitiated. That is until they learn what hydroponic systems are.

With all these benefits of hydroponics systems, you may want to give DIY hydroponic systems a try.