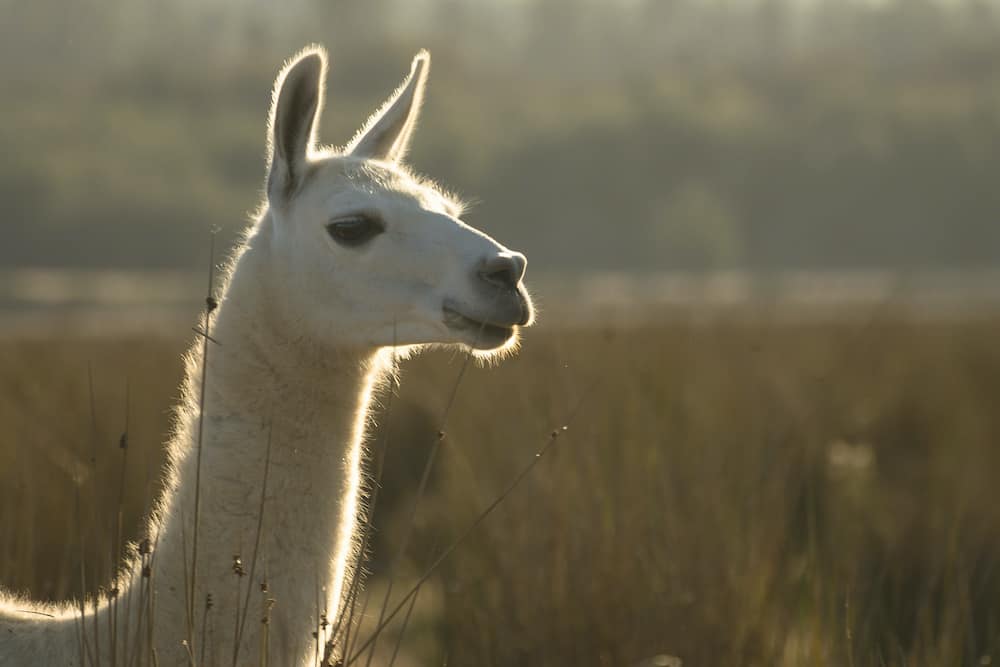 Alpaca vs Llama – There are different types of livestock that one can raise. You will never run out of options, but we personally have a sweet spot for alpacas and llamas.

They are such a joy to raise, and if you’re thinking of raising either of them but can’t decide which one is better, we’re here to help.

We’ll look into the differences between alpaca vs llama and provide valuable information about each of them. They are both among the best farm animals to raise.

What Is an Alpaca?

An alpaca is a domesticated version of a vicuña, a ruminant animal living in the higher regions of the Andes and a descendant of camelids. That said, there are no alpacas in the wild, which is probably why alpacas are very at-home with humans.

Why Raise an Alpaca?

With their warm personality, a lot of people raise an alpaca as a pet. However, if you are really serious about raising a herd for your homesteading lifestyle, you will be pleased to learn that there are several benefits.

Some of the most notable ones include:

Their Fibers Are Softer

Compared to other animal fibers like wool, alpaca fibers are simply higher in quality. They are warmer, softer, and lighter.

You Don’t Need to Dye Their Fibers

Alpacas are available in a wide variety of shades, so you won’t need to process their fibers after harvesting them.

You Would Be Able to Create Your Own Clothes

The homesteading lifestyle revolves around the idea of being self-sustenance. With the help of your alpaca, you can knit your own sweaters, create your own fluffy blankets, crochet shawls, and more.

You don’t even need to keep their fibers to yourself. They are high in demand and very profitable.

However, it might take some time before you can raise alpacas for profit. That is because you would need a decent-sized herd to harvest a good amount of fiber for selling.

What Is a Llama?

To tell the difference between llamas vs alpacas, we also need to define what a llama is. Like the alpaca, a llama is also a domesticated animal that hails from the Andes. They are also a descendant of camelids.

You also wouldn’t find wild llamas, so they are accustomed to humans. That said, their similarities end there as we will find out more about later. Learn what do llamas eat to learn about pasture foraging, herbivore pellets, salt, and grains.

Why Raise a Llama?

Llamas were originally raised as pack animals. Aside from carrying heavy burdens, though, here are other reasons you would want to raise a llama as more than just a pet:

The fibers of a llama are very heavy and warm; in fact, you can even use them for insulation. We personally like using their fibers as cushion filling.

What’s even great about their fibers is that they don’t contain lanolin, so people with allergies can also use them.

They Can Protect Other Livestock

Are you having problems with wild coyotes attacking your herd? Llamas can help.

Surprisingly, a single llama can protect a hundred animals, such as chickens, goats, and other types of livestock, from threats. They are excellent livestock guardian animals. They are also easier to train compared to dogs.

You Can Harvest Them for Their Meat

Though we don’t usually raise our llama for meat since we have other livestock for that, it doesn’t mean you can’t do so. 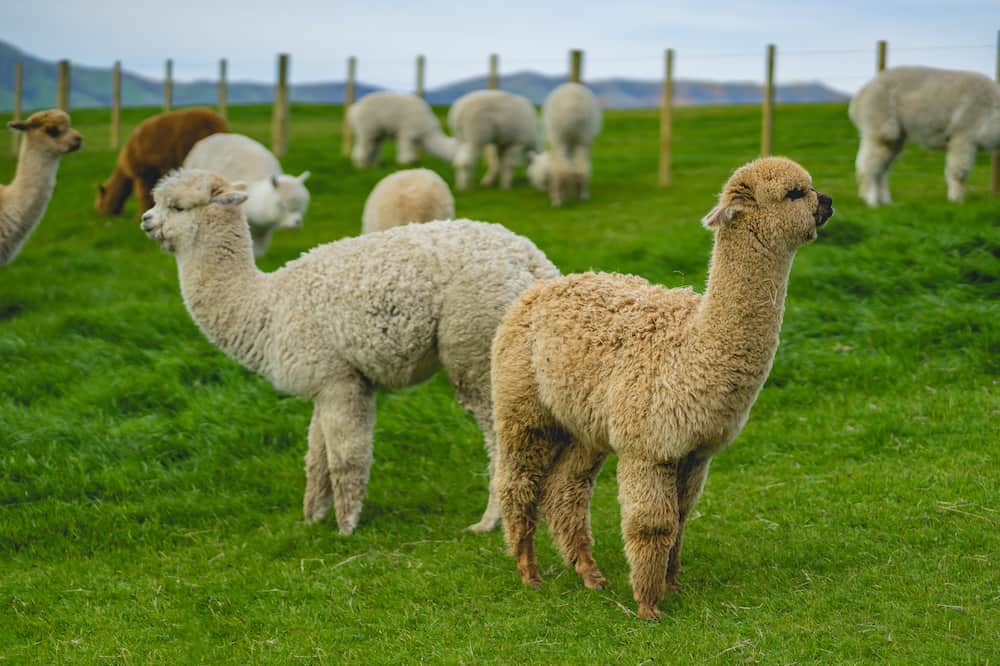 You can tell the difference between alpaca and llama by now due to the benefits we have shared above. However, aside from that, here are their main differences:

The first, and most obvious difference between llama vs alpaca, is their size. Alpacas are significantly smaller compared to llamas.

There is a significant difference in their weight too. An average alpaca weighs around 150 pounds while a llama can get as heavy as 400 pounds.

The difference between llama and alpaca in terms of looks is not very significant to the untrained eyes.

Upon closer inspection, though, a llama’s face is longer and more pointy, while an alpaca’s face is blunter and less pronounced.

As mentioned, alpaca fibers are more delicate. They are softer and finer compared to the heavier, warmer wool that llamas produce.

Another difference is that even if they’re smaller, alpacas produce more fibers than llamas. Learn about starting an alpaca farm.

Finally, in terms of llama vs alpaca fibers, alpacas offer more colors, so you might need to treat llama wool to get the color that you want.

While both are domesticated animals and generally more at ease with humans than other creatures, there is a difference between llamas vs alpacas when it comes to their disposition.

Alpacas feel more comfortable with a herd, while llamas are more independent.

Llamas are tougher too, so you can rely on them to offer protection against predators.

Llamas and alpacas have always been seen and treated by humans as creatures of different purposes. For instance, alpacas were never regarded as pack animals the same way that llamas were.

They were simply raised for their fiber, although they are sometimes harvested for their meat in Peru.

Llamas, on the other hand, were seen mainly as service animals. They can carry burdens, pull carts, and more.

Also, since llamas have a higher amount of stiff guard hair intertwined to their coats than the alpacas, people can use it to produce ropes, rugs, and weaved and knitted products.

Although you can’t easily differentiate alpacas and llamas through the milk they produce, this is important if you plan to raise either or both them and maximize the benefits you get.

On that note, the milk harvested from alpaca and llama is both nutritious and delicious.

That said, both produce smaller amounts of milk and are harder to milk than cows, goats, and other commonly domesticated animals.

Are Llamas or Alpacas Nicer?

Both of them are kind to humans. In terms of their nature towards humans, though, the difference between alpaca and llama depends on the specific personality of the animal that you are going to care for.

In our personal experience, alpacas tend to be more skittish towards humans, but that doesn’t mean they won’t like to be around you. After all, they are domesticated.

On the other hand, we have found llamas to be more confident and comfortable around humans. Maybe that’s due to their “braver” disposition.

That makes the difference between llama and alpaca in terms of specific personalities.

In the end, it will all boil down to how you’re going to raise them. If you don’t really bond with either that much, they won’t warm up to you.

We already know that llamas spit, but do alpacas spit, as well? Yes and no. If you’re asking if alpacas can collect spit in their mouth, aim at something, and release it as a projectile, then yes, they can spit.

If you’re asking if they spit on humans, then no. They probably would if they’re really threatened, but they’re simply not accustomed to spitting at humans.

They usually reserve it for other alpacas to ward them away, such as what female alpacas do if they’re not interested in mating with a male alpaca in heat.

They also do so to show their strength or dominance.

Curiously, it is not in a llama’s nature to spit at humans, as well. It only happens if they have not been raised with other llamas, and they view humans as llamas, too.

They will also do so if they feel threatened or if they have always been mistreated.

Otherwise, if you will raise a llama well and give it time to bond with other llamas, for it to tell the difference between llamas and humans, then we don’t see why it would even think of spitting at you.

Bison vs Buffalo: The Truth About Their Differences

Main Differences Between Alpacas and Llamas

Alpacas and llamas look similar, so it’s no surprise that they are usually confused with each other, but they actually have striking differences.

Their height, weight, and facial features, for instance, are distinct from each other. They also have different personalities. You’ll find llamas to be more protective of other animals.

In terms of their fibers, if you want a delicate type, you should go for alpaca, but if you want thick, warm, wool, go for a llama.