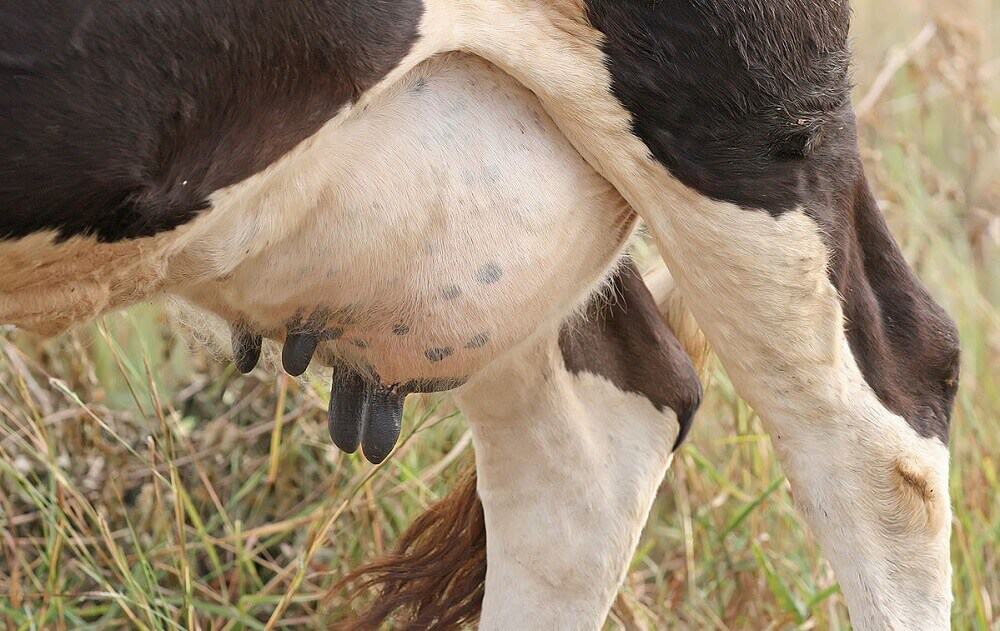 Cow udders are some of the most fascinating organs for several reasons. To begin with, they are hardly ever visible until the cow goes through some physical transformation, in which case, they are unmissable. Some of the questions that most people who are not very familiar with raising cows would ask are “how many udders does a cow have?”, “does every cow have udders?” “What is a cow’s udder used for?”

Let’s take a quick look at cow udders and try to answer some of these questions today.

What Is a Cow’s Udder?

Udders are large organs on a cow that often have several mammary glands (two or more) attached to them. These mammary glands often come with teats that look like nipples. Through these teats, the mammary glands can be drained by suckling calves or when milked by farmers in the case of dairy cattle.

In many cases, you will find that there are many different types of cows in the world. Mostly, we have highland cows, beef cows, dairy cows, non-dairy cows, and so on. Dairy cows tend to have more pronounced udders as they tend to carry quite a bit of milk.

Highland cows, or beef cattle, have udders too, but since they are generally raised for their meat, their udders aren’t always quite as pronounced as those of the dairy cow. Since highland cattle have such low milk production, their udders are often not as visible.

How Many Udders Does a Cow Have?

Each cow has only one udder that has four teats. However, as mentioned, whether or not the udder is easily visible will depend on the kind of cow in question. In farming, cows are divided into different categories depending on their gender and reproductive state. These include:

This is a female cow, and, in many cases, it has one pronounced udder. A cow’s udder is often quite pronounced because it has already given birth to at least one calf. Because cows who have given birth frequently need to breastfeed their calves, the udders tend to fill up with milk both during and after the pregnancy.

The farmer often milks these cows after they give birth to their calves because the milk production rate is often too high for just one calf.

That’s mostly because her body is getting ready to feed the calf by starting to produce milk. The udder is where this produced milk is stored before and after the calf is born.

A bull is a male cow that hasn’t been castrated. Bulls, and all male cows, do not have udders or teats.

A steer is a castrated male cow. Steers do not have udders nor do they have teats.

This is a currently pregnant cow or heifer that is near calving. In most cases, the udder is quite visible depending on how far along the pregnancy the springer is. Cows are pregnant for 283 days, just under 9.5 months.

This is an infertile female cow that was born with a male twin. These cows also have visible teats, but their udders are often not visible and most likely never will be. This is mostly because for the udder of a cow to become visible, the cow needs to get pregnant. The udders become visible in preparation for the calf.

How Come Some Cows Don’t Have Udders?

There are three main reasons why some cows don’t have udders.

They Haven’t Had Calves Yet

The udders of dairy cattle are often more pronounced because these cows are genetically engineered to produce milk. Beef cattle or non-dairy cattle often don’t have this kind of engineering. Therefore, they don’t often need udders, or their udders never show.

There are also other exceptions to this rule. Beef cows kept in the presence of beef bulls hardly ever have udders. This is because the beef bulls are often castrated early and, as such, are unable to get the beef cows pregnant. Since these beef cows seldom get pregnant, their udders never develop in preparation for calves or milking.

Steers and bulls do not have udders.

What Happens When a Cow Is Not Milked?

It’s not unheard of for a cow to give birth only to lose the calf. In that case, what happens when you don’t milk such a cow? At its prime, a lactating cow can produce up to eight gallons of milk daily.

Even if the calf survives, it couldn’t possibly drink that much milk daily. As such, dairy farmers make it a habit to milk their dairy cattle for several reasons:

Mastitis can cause an infection in your cows and, if left untreated, might lead to blockage in the teat canal, leading to poor milk production, poor udder health or even udder edema.

Thankfully, one of the best ways to prevent this is to milk the cow during calving. This can be done by hand, but if you have a lot of female cattle on your dairy farm, using a milking machine would be more practical.

Dairy breeds such as the Brown Swiss or milking Shorthorns are excellent examples of female cattle with visible udders. Regardless of how prolific the dairy breed is, each female cow only has one udder. The only difference is their ability to hold a lot more milk in those udders.

Do other animals have udders?

Every mammal has some kind of mammary gland through which they can feed their young. In many cases, however, only quadrupedal animals (four legs) and ruminants, such as goats and cows, have udders.

There are, however, some exceptions to each case. Some quadrupedal animals, such as cats and dogs, have breasts instead of udders and teats.

How heavy is a cow’s udder?

A cow’s udder can weigh anything between 25 and 60 pounds without the milk. The size of the cow’s udder is one of the main factors limiting how much milk a cow can produce. In many cases, the udder size increases by about a third of its size during the milking period.

How much milk can a cow’s udder hold?

Depending on the breed of the cow, the udder can hold anything from 3 to 6 gallons of milk at any given time. This is particularly true with dairy cows, which can easily produce 8 gallons of milk daily.