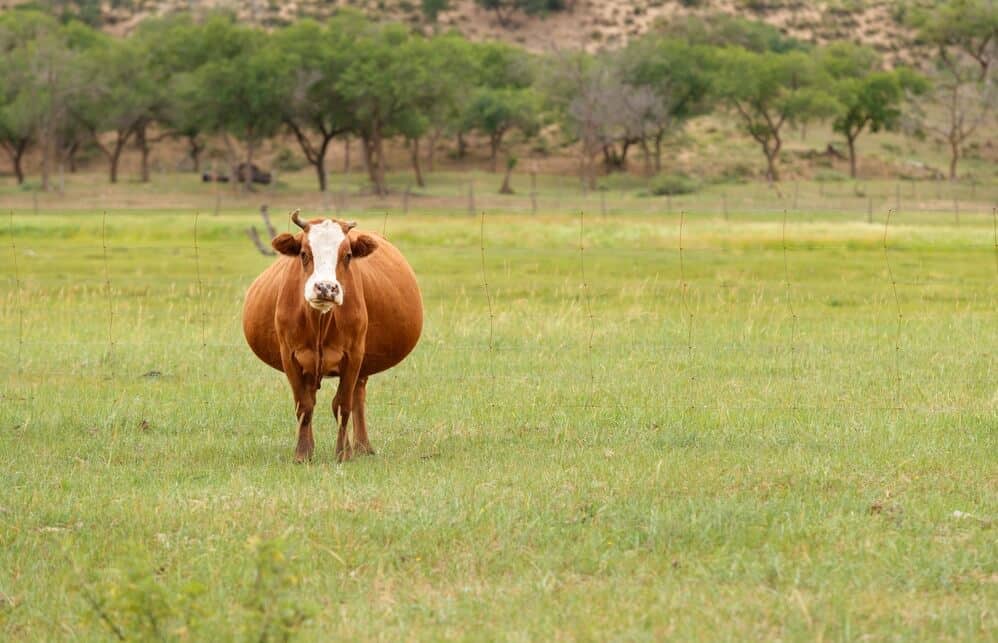 Few things are quite as exciting to most cow breeders as having pregnant cows in the herd. This often means that, with the right management, the herd size will increase as soon as the cows give birth. But how long are cows pregnant, and what kind of complications can you expect during this gestation period?

How Long Is a Cow’s Gestation Period?

How long is your cow going to be pregnant? On average, a cow’s gestation period is about the same amount of time as a human pregnancy—9 months, or about 283 days. This period is considered typical for most bovine breeds.

It should be noted, however, that cows carrying bull calves tend to have a much longer gestation period than cows carrying heifer calves. That being said, the average gestation length in cows is 283 days, or 9 months and 10 days.

Just as it’s the case with humans, there are often several complications associated with a cow’s pregnancy. That’s one of the main reasons why breeders or farmers need to keep a vigilant eye on any pregnant cows in their herd.

Now that we know your cow will be pregnant for at least 9 months, let’s take a look at the entire process, from when the cow is in heat to how you can tell that the cow is pregnant, as well as some tips on how to deal with calving difficulties.

How to Tell When Your Cow Is in Heat

As a farmer, your ability to detect a cow’s heat cycles can be an invaluable skill if you intend to organically grow your herd. Failing to detect when your cow is in heat and breeding cows that aren’t in heat can lead to extremely low fertility within the herd and even some economic losses.

A cow is said to be in heat or estrus every 21 days. This estrus cycle is essentially 24 hours when the cow is influenced by increased estrogen levels, which causes the heifer to show some signs of heat.

The first 24 hours of estrus are important, mostly because this is when ovulation begins and the egg is released. If this egg isn’t fertilized within that period, the breeding will be unproductive, and you will have to wait another 21 days for the estrus cycle to come around again.

According to research, a cow’s standing heat (when she can be impregnated) often lasts between 15 to 18 hours but lasts for as little as 8 to as many as 30 hours. It’s important to recognize the signs of heat in your cows in time to avoid missing the window.

Here are some signs that your cow is in heat and needs to be mounted if she is to get pregnant.

Swelling or Reddening of the Cow’s Vulva

In many cases, the cow’s vulva will swell during heat and moisten and redden on the inside. However, these signs often come about before the heat and remain in place for some time after the heat. As such, you shouldn’t use them as a precise estrus indicator. At least not independently.

Since the cow’s estrogen levels are elevated when in heat, you may observe some strands of mucus being secreted from the vulva, or some may be smeared on its tail, flanks and perineal region. In some cases, however, you may not observe any mucus discharge at all until the cow has been palpated during artificial insemination.

Most heifers will start mounting other cows when they are in heat or are just coming into heat. This is particularly true when there are no bulls around.

Standing to Be Mounted

This is one of the most common signs of estrus in heifers or older cows. Cows that stand to be mounted are often in heat, while those that move away from bulls that attempt to mount them often aren’t in estrus. In many cases, cows will stand to be mounted between 20 and 55 times within their reproductive cycle.

In most cases, you will find that cows in heat are restless and more alert than most other cows in the same herd. They will often stand while their herd mates are either laying down or resting; they will bellow frequently and trail other cows and try to mount them.

Cows exhibiting this behavior should be monitored closely as they are in heat and may start exhibiting standing behavior. Cows exhibit other signs and habits in heat. These include:

In most cases, these signs will be more evident in young heifers than in older cows.

Tips on How to Tell When Your Cow Is Pregnant

Ideally, every breeding season should lead to some pregnancies within the herd. If you are concerned about whether or not your cows are pregnant, here are some signs you can look out for after the breeding season.

Of course, there are other ways to tell if the cow is pregnant. These include:

How to Tell When a Cow Is About to Give Birth

Now that we know how to tell when a cow is pregnant, let’s take a quick look at how to tell when it’s about to give birth to a calf. As mentioned, the duration of the pregnancy is around 9 months and 10 days, but it also depends on the kind of calf (heifer calf or bull calf) the cow is carrying and how many.

It’s generally easier to tell how long a cow has been pregnant and, therefore, when it’s about to give birth by simply counting from the day of the breeding or insemination. However, some factors often lead to early calving in cattle.

Here are some signs that your cow is about to give birth:

Even though a cow having “fuller udders” isn’t always a reliable sign, especially in dairy cows or mini milking cows that have full udders anyway, it can be one of the signs to look out for in conjunction with the rest. It’s also quite effective on beef cows or beef cattle that don’t always have full udders.

Be on the lookout for these signs in case your cow experiences birthing or calving difficulty and may need your assistance. If the heifer is in its very first calving season, it’s advisable to have a doctor of veterinary medicine present to ensure calving ease.

Attention by a qualified vet will also help improve the cow’s body condition or health in preparation for the next breeding season. This, in turn, can help increase the cow’s pregnancy rate. Which, in turn, will help increase your farm’s productivity and profitability. Learning how long is a cow pregnant will help you prepare for the calves.

What is herding cattle