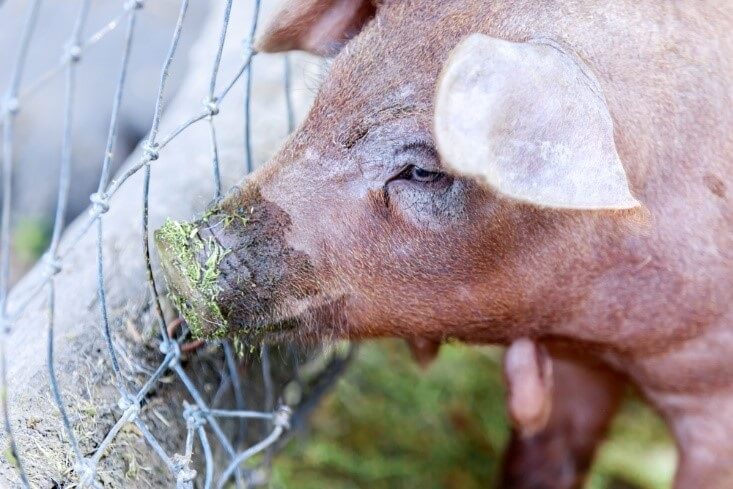 Red Wattle pigs, also known as Red Pigs, Red Wattle or Red Wattle hogs, are a pig breed that is unique to North America. That makes this pig extremely valuable genetically as a heritage breed (breeds raised by our forefathers). This reasonably large pig is known for its excellent foraging activity, hardiness, and rapid growth rate, making it one of the best species to raise for pork or meat production.

For good reason, farmers across the country are fond of the Red River hog. If you are interested in raising livestock, here’s what to know about Red Wattle pigs. Starting a small pig farm with this breed might be a good idea for several reasons.

The history of the Red Wattle pig isn’t as clear as most livestock historians would like it to be. Most information about this pig species only dates back to the 1970s. It’s during these years that Mr. H.C. Wengler accidentally came across a herd of Red Wattle hogs foraging in the forest around East Texas. Wengler crossbred two of these wild sows with a Duroc boar to come up with the “Wengler Red Waddle” species of pig.

About a decade later, in the 1980s, a Mr. Robert Prentice also came across a herd of large Red Wattle pigs in the same region of East Texas. This herd quickly became known as the “Timberline” line of red wattle pigs. Prentice crossbred his line of wild hogs with Wengler’s Red Waddle pigs to develop the Endow Farm Wattle Hogs.

As you can see, the history of these pigs isn’t quite as clear as the story behind the species, leaving us with more questions than answers. For instance:

These are questions that need answers, which are unfortunately unavailable. Therefore, the Red Wattle pig’s recorded history only goes back to the early 1970s or late 1960s at best.

Even though three registries were maintained in the 1980s, there was no central association. In 1999, the American Livestock Breeds Conservancy found 42 Red Wattle pigs that qualified as breeding stock belonging to only six breeders.

As such, this breed has been placed on the threatened list by The Livestock Conservancy. Since September of 2012, the Red Wattle Hog Association has maintained the pedigree book of this particular breed, which was created in 2001.

One of the main reasons the Red Wattle pig is threatened today is that it became adversely affected by the extremely active commercial pig market that almost wiped out the Large Black pig. This market was in the 1980s, and as a result, farmers crossbred these pigs for their rapid growth and meat production without really caring about maintaining the breed.

It’s an important and distinct characteristic of the species. These wattles are even passed down to the offspring or piglets that result from cross-breeding Red Wattle hogs with any other species.

The Red Wattle pig comes in various shades of red. Red, however, isn’t the only color these pigs have. Some have black patches or specks, while others have black and red hair. Some Red Wattle pigs are almost black in color.

The Red Wattle pig is a large swine with either long and wavy hair or short and straight in some. A mature boar or sow can weigh up to 800 or 600 pounds, respectively, although these pigs have been known to get close to 1,200 lbs in some cases.

The Red Wattle pig can be as tall as four feet and as long as eight feet when fully grown. Today, however, most pig farmers and breeders prefer hogs with a butcher weight of about 325 pounds and a hanging weight of about 245 lb.

This pig has a slim nose with a slight curve, the jowl and head are clean and lean, and its ears tend to be upright with drooping tips, which gives it a jovial look and a friendly look. It also has a short-coupled body, with its rear or rump slightly arched.

Red Wattle sows are known to be excellent mothers. These domestic pigs can give birth to large litters of about 9–10 piglets at a time. They can provide these piglets with good quantities of milk.

Characteristics of the Red Wattle Pig

Red Wattle hogs are quite hardy. They are well-known for their excellent foraging capabilities, making them ideal pasture pigs. Thanks to their rapid growth rate and ability to forage for their own food, these pigs are akin to wild hogs or wild boars. Red Wattle pork is exceptionally lean and juicy. It also tends to have a rich, beef-like texture and taste.

The Red Wattle pig has a docile nature and a friendly temperament for such a large animal, making it an excellent choice as a farm animal. They can adapt to a rather wide range of climates.

Every pig farmer has their own unique reasons for raising the pig breeds they have on their farm. Some do it for the money, others because the breed they chose is easier to raise, and some because they want pet pigs like Kunekune pigs.

When it comes to the Red Wattle pig, it’s easy to see why most farmers would want to have a few on their farms. This breed of pig:

In addition, there are other pros to raising this breed:

As far as pig breeds go, Red Wattle pigs are an excellent choice for farmers who want something hardy that offers a rapid growth rate and provides extremely flavorful pork. The fact that these pigs give birth to large litters is an added advantage. Being they are a heritage breed on the threatened list, having a few on your farm can be a way to sustain their population. You care for them as you do any pigs. Pigs love mud, need shelter, food, and water. and since

Do Red Wattle Pigs have tusks?

Yes, some Red Wattle boars, especially wild boars, have impressive tusks, but they are generally quite docile creatures.

Yes, even though they are foraging pigs that do well in a pasture setting, Red Wattle pigs still need a clean, dry place to sleep at night and protect themselves from the elements.

Do Red Wattle Pigs get sickly?

No, these are very hardy creatures that hardly ever get sickly when cared for properly. Like all pigs, they need nutritious food, access to clean water, shelter, and enough space. That is not to say that they don’t ever get sick. They are susceptible to the African Swine Fever (ASF) like most other pig breeds.

Adding them to your small farm or backyard — in areas in which livestock are permitted — can provide you and your family with a sustainable meat source. Their pork is tender and flavorful and the sows have strong maternal instincts and farrow large liters. Red Wattle pigs are on the threatened list of the American Livestock Breeds Conservancy (ALBC).