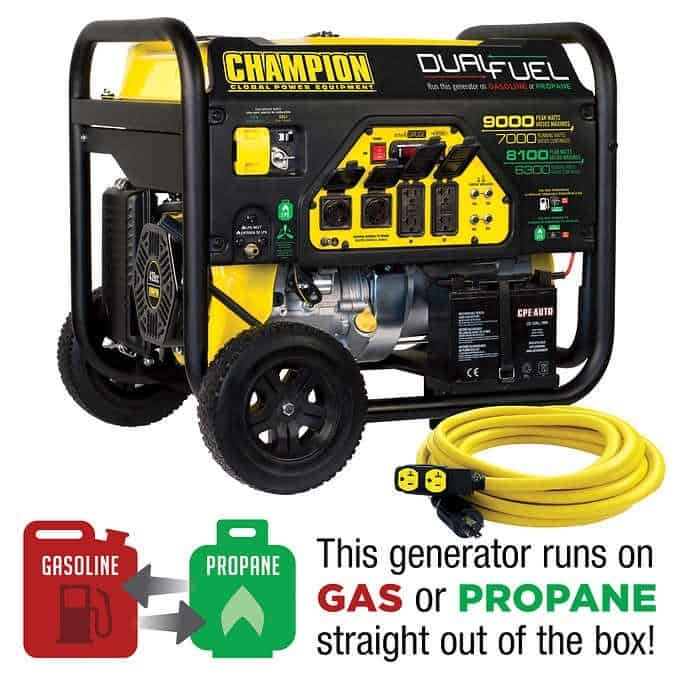 Champion Dual Fuel generator uses either propane and gasoline. I think it’s the best 9000 watt generator on the market.

As a 9,000 watt peak when it’s running on gasoline, and 8,100 watt peak on propane, and 6,300 watt regular running, and 7,000 watts on gasoline, we got to remember the propane had a lower energy density than gasoline.

This generator is designed with a fuel determination switch.

I purchased this generator at Costco, but it was shipped to me. The shipping label weight says 220 lbs but I think the actual weight of the Champion Generator is closer to 200 lbs.

Now about most people that is going to buy one of these generators are going to put gas in it when they get it. The thing they’re not going to put in it is Sta-Bil.

Even if they use the generator for an RV, it’s not going to run all the time.

I recommend when you buy a generator go ahead and use Sta-Bil, or whatever fuel preservative you choose, fill your tank and then you’re good to go, otherwise you’re going to be complaining in six months this expensive generator you bought doesn’t run right.

But from the first time you fire this generator up and fill its tank the first thing you need to do is go ahead and treat it with Sta-Bil.

You add one ounce of Sta-Bil for every 2 ½ gallons of gas.

Don’t think that by adding extra sta-bill you’re making the gas last longer you’re not, it’ll actually cause a caking inside the top of your tank…and you are wasting Sta-Bil unnecessarily.

So don’t go beyond the instructions on how many ounces to add per gallon.

I use 91 octane and Sta-Bil when I first set a generator up because I might not use it again for a long period of time.

I might not burn that tank of fuel for a while and that’s not a good thing to do, just fill it full of a tank of fuel and then test it out.

See that it works great and then go park it until you need it in a power outage.

But if you do not have Sta-Bil, there is a high probability the gas will not be good and you have gummed up you fuel system.

So you want to make sure you protect your gasoline in it.

I personally prefer a dual fuel generator because it gives me option in case I run out or unable to obtain one type of a certain fuel source.

I really like a propane generator because it runs cleaner, I do not have to worry about old fuel gumming up the generator’s fuel system, and I can store propane fuel for long periods of time without having to worry about it going bad or having to add in a stabilizer.

The propane I used for this test was about 10 year old propane, generator operated just fine.

The Champion Dual Fuel Generator comes with the following.

It comes up with a generator extension cord, that I think is a 10 gauge.

It’s heavy duty, I think it weight about 10 lbs.

It has big heavy duty quad outlet power plug that has outlets on both sides and I believe that the way that it’s designed is they’re all 120 volt.

I personally prefer either Amsoil, Royal Purple or Castrol to use in a stationary engine like a generator.

A fueling funnel to put gas in the generator’s tank

It comes with a battery to start the generator. Champion generators are know for their easy startability.

It comes with a full parts kit with everything you need

It comes with a propane connection kit, but not a propane tank

It also comes with a ‘Wheel’ kit (see below)

Startup instructions that are a weather proof paper and tag.

However, it gives you the detail what the generator can run.

If you look on one side of the generator near the engine, there is a tag that has the same information.

Regarding the wheel kit that comes with it.

Anyone who installs wheels on a generator, you must use solid wheels.

Whether they’re solid rubber or are hard rubber-plastic kind of combination but they can’t be pneumatic.

They can’t be aired up.

You can’t put air in these tires.

The reason is because the vibrations of the generator will cause cavitation.

Cavitation, if you don’t know the terminology for that, is like the back of a prop on a large boat that stirs up all the bubbles.

What happens is that cavitation will transfer itself if you have aired up tires.

The reason that you do not have aired up tires on a generator is because of cavitation.

So if you’ve ever wondered why generator manufacturers use solid tires or non-pneumatic tires, that’s the reason.

Which is a pretty good size single cylinder.

It has a metal air cleaner cover, unlike most brands.

That’s actually a very good upgrade if you consider most of them are plastic and any heat near them they can warped and then they won’t seal correctly.

The Champion generator has a L530 120 volts 30 amp outlet for your typical RV hookup.

All these outlets have resets on them which is kind of nice.

If it doesn’t then it is a 15 amp duplex outlet.

I have the ability to operate a good many of my power tools using this generator.

Which is the best?

Easy to get to oil check, and it has standard oil drain on it.

It come with a quick drain plug.

You just remove that and you can drain your oil.

It has a big air filter.

It’s that good quality air filter to start with.

The carburetors, you want to check these after about 50 hours.

Check all of your bolts and screws on these things.

They will come loose.

I have had Champions that ran over 6000 hours and so far I’ve only lost one due to me not doing a preventative maintenance check.

The reason is because the only failure – these engines for these don’t fail.

They don’t fail at all.

So I mean, you take it off, put a less restrictive muffler.

Yes, it’s going to be a little but louder but when I do it out here, I’m going to actually be able to take a hose and drop it down into a little hole in the ground.

That’s called a sound pocket or it will just be something that just spin on and just drop right down into the ground with a flex tube.

Believe it or not, if you take your generator out there if you want to be free of chance of fire, dig you a little 6 inch hole in the ground, about 6 inches deep, and just put your muffler point down into it.

Believe it or not, you got no worries about no fires.

Gas Start Up Process for the Champion Dual Fuel Generator

The process for starting these generators is generally pretty straight forward.

Make sure that the gas valve is in the on position.

The you take the choke and move to the halfway point.

If it’s real cold you might want to push the choke all the way over.

Next turn the battery on and you’re going to turn power on to the generator.

You might hear a mild click in there, and then you push the electric start button and it should start right up.

Since the generator is new, it might take a second to start.

The Champion 9,000 Watt generator is a computer safe generator, mine puts out a strong clean voltage and hertz.

I determined that my voltage is correct and I used an electric heater for the purpose of setting this generator up with its initial load.

The electric heater was a 1250 watts draw on low.

When I turned up the electric heater to high, it was a 1500 watts draw, and the generator didn’t even bog down.

The generator puts out 247 volts, but the cord it comes with is made for 120 volts, RV usage and other things that run on 120 volts.

You will need you a 240 volt rated cord for the sole purpose of 240 volts if you going to connect it to a transfer switch to connect to your homes electrical panel.

The process of shutting down your generator is pretty much a reverse of the start up process.

First, you want to unplug your load or anything that is plugged into the generator.

Then you want to shut off the gas and let the generator die on its own.

When you are going put your generator into storage, be sure to allow all gasoline to burn out of the engine and carburetor by shutting the gas off while it’s running starving it up gasoline.

Propane Start Up Process for the Champion Dual Fuel Generator

When using propane to run your generator, you first connect the propane tank.

Do not connect the included propane hose with pliers, channel locks pliers, wrenches or over tighten it.

There is a spring in the propane tank, and just by hand tightening it snug that I’ll put the pressure against the spring and it will seal.

When connecting the propane hose to the generator, do not use pipe dope another type of thread wraps, no Teflon, it’s supposed to be a standard metal to metal fitting.

Just snug it with a wrench…lightly.

Open the valve on the propane tank, check for leaks by listening carefully.

You can hear the propane if they’re leaks and in general if you think you have a leak or you smell propane go ahead and get you a small little paintbrush and some dish soap and wipe all the joints and everywhere on here look for bubbles, it’ll make bubbles if it leaks.

After you have connected the propane to the generator, there is a switch you need to move to the ‘Propane’ position.

The you turn power back on to the battery.

Remember to always turn off the battery switch when you’re not using the generator.

Move the choke to the halfway point.

If it’s real cold you might want to push the choke all the way over.

Next turn the battery on and you’re going to turn power on to the generator.

You might hear a mild click in there, and then you push the electric start button and it should start right up.

While using propane, the generator has a regulator that controls and reduces fuel for the purpose of regulating the engine speed.

I find that my Champion Dual Fuel 9000 Watt generator sounds and runs a little quieter.

The voltage reading was at 246 Volts.

When I turned on the electric heater on low for a 1250 watt draw, the generator barely bog down.

Turning the electric heater on high, created a 1500 watt draw, but didn’t seem to make a difference.

This Champion that we just picked up.

I’ve had nothing but perfect experience with this.

Everything on them is very weather-resistant.

So far so good.

I also have a DuroMax called the ‘Beast’.

It’s real good, but I think this one’s probably going to be better.